Rise of the Resistance:
A Spoiler-Free Review

Since Rise of the Resistance has opened in Star Wars: Galaxy’s Edge there has been lots of new information to share about the ride, how it operates and how guests can find their way onto the attraction.

Shortly after it opened, we went to Disney’s Hollywood Studios to check out the ride for ourselves. At this point, I should mention that Lauren is normally open to spoilers. She likes to read spoilers for movies and TV shows (when she wants) and I typically avoid spoilers like the plague. For Rise of the Resistance, however, we both opted to read only what Disney had shared about the ride (very general information) and avoid any spoilers about the entirety of the ride.

Since we know there are some of you who prefer spoilers, feel free to read our “Spoiler-filled” review of Rise of the Resistance …We seriously spare no detail.

For everyone else, here’s a spoiler-free review of the ride, using only the information that Disney has already shared about the attraction. 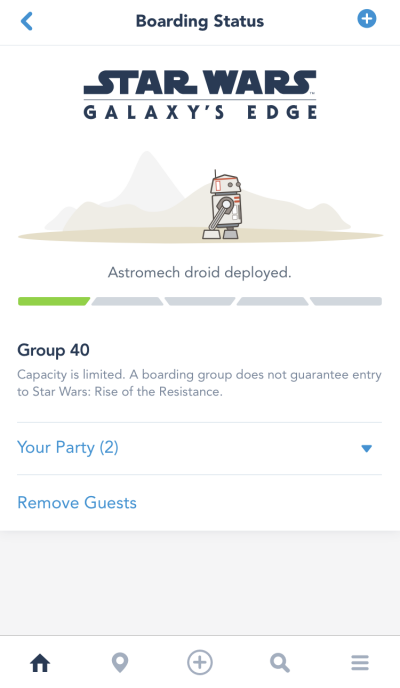 The Galaxy’s Edge page in My Disney Experience will show which groups are currently boarding and when your number is listed, you will have 2 hours to return to the ride and get in the line. Until that time, you can explore the rest of Galaxy’s Edge or the rest of the park. You can even leave the park and come back (within your 2-hour return window), though there are risks of missing your time if you do.

How Early Do You Have to Arrive? 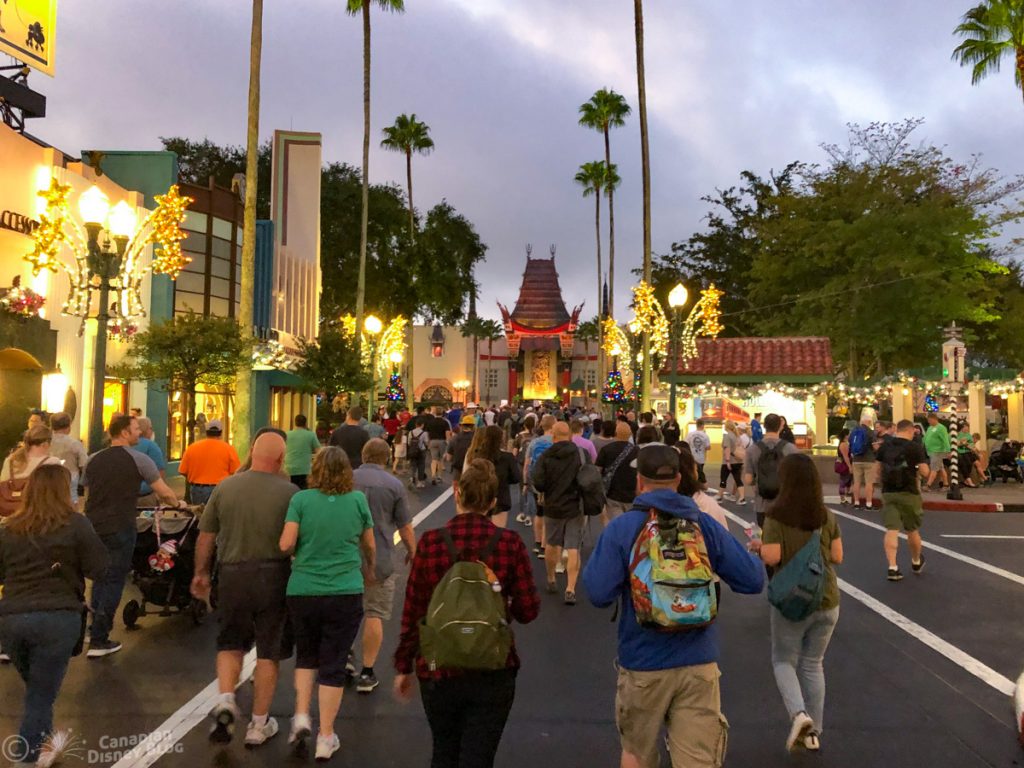 Due to high demand, the park has recently increased their operating hours. Guests were showing up as early as 4am to get in the virtual queue for Rise of the Resistance. Now, however, with Disney restricting the boarding groups to open with the park official opening, guests don’t have to be there quite as early.

It’s a really tough situation, but with this much demand, we still recommend arriving at Hollywood Studios 1 to 1.5 hours prior to the park opening in order to make sure you’re in the park by the time it officially opens.

If you are in the park when it opens, you have a better chance at getting an earlier boarding group # and the earlier you will likely get to ride the attraction. Guests arriving after the park opens may only receive a higher boarding group number or they may not get one at all depending on how busy the park is.

Our boarding group #40 wasn’t called until 1-2pm, so we waited approximately 7 hours before we were able to ride Rise of the Resistance. Your timing may vary, depending largely on the crowd sizes and the tenacity of the fans who want to ride this brand-new attraction.

How Do You Get To Hollywood Studios? 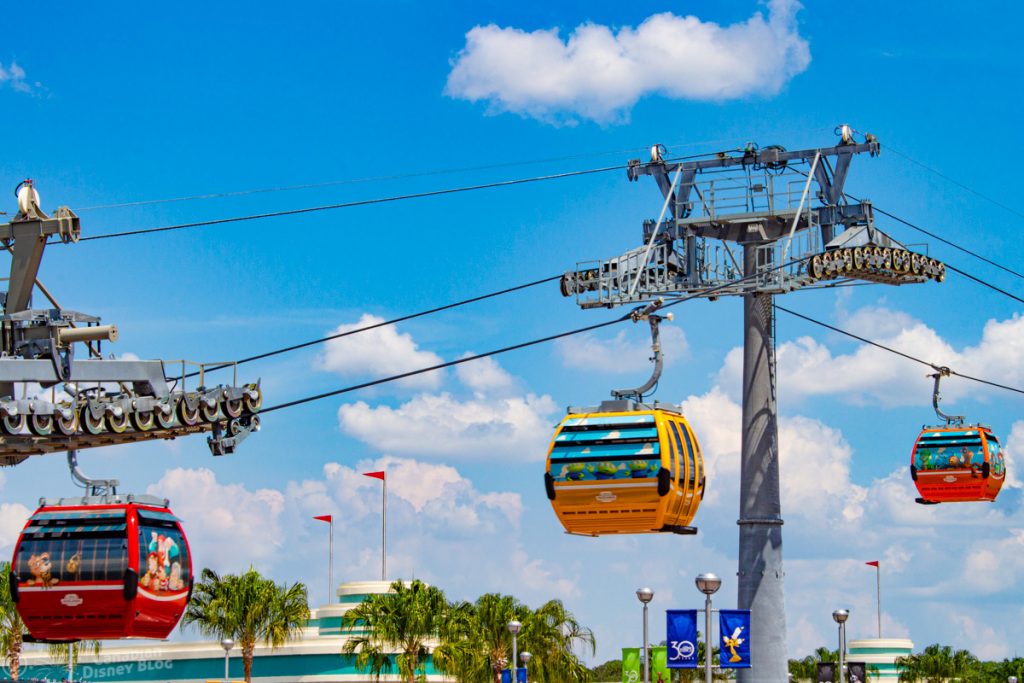 Disney Transportation typically starts operating 1-hour prior to the parks official opening. Unofficially, they can sometimes start earlier than that, but it’s better to just expect them to operate around that hour mark. The same goes for Disney’s Skyliner (from the Pop Century, Art of Animation, Caribbean Beach and Riviera Resorts). Expect it to operate 1-hour prior to the park opening.

If you wish to arrive at the park earlier than that time, you have a couple of options. You can drive yourself, if you rented your own car. You can also take a Lyft, Uber or cab to the park. Lastly, you can camp out overnight to be first in line the next morning. Okay…maybe not that last one, but that’s how it feels sometimes, given the crowd levels we experienced that early in the morning. 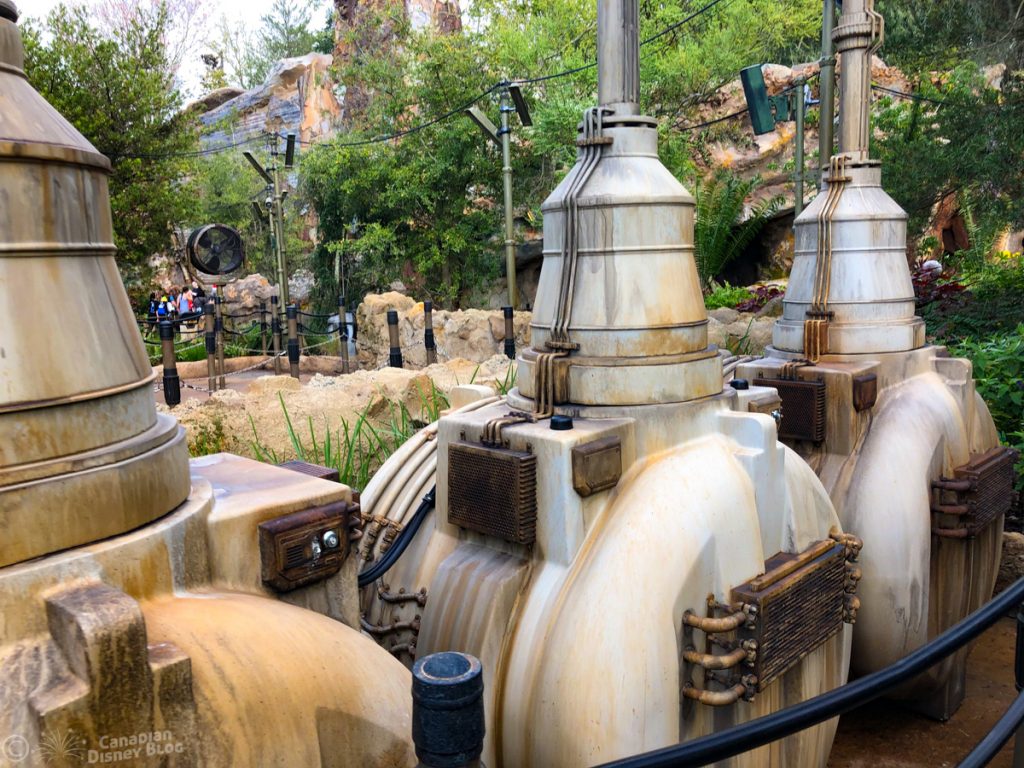 When your boarding group is called, it’s not an immediate walk-on-the-ride time, you are just being called to get in the queue for the ride. Depending on when you arrive in your 2-hour boarding window, and the number of people who arrive at the same time, you can expect to wait anywhere from 20-90 minutes for the attraction. Those are the extremes. We waited about 30-40 minutes before making our way into the actual attraction.

Part of the Rise of the Resistance queue is outside and then there are a number of rooms inside to walk through as well. Typical Disney queue, once you get further along, there are some neat things to see…all belonging to the resistance and helping to create the story around you. There are no spoilers here, just cool pieces to get you excited for the ride itself. 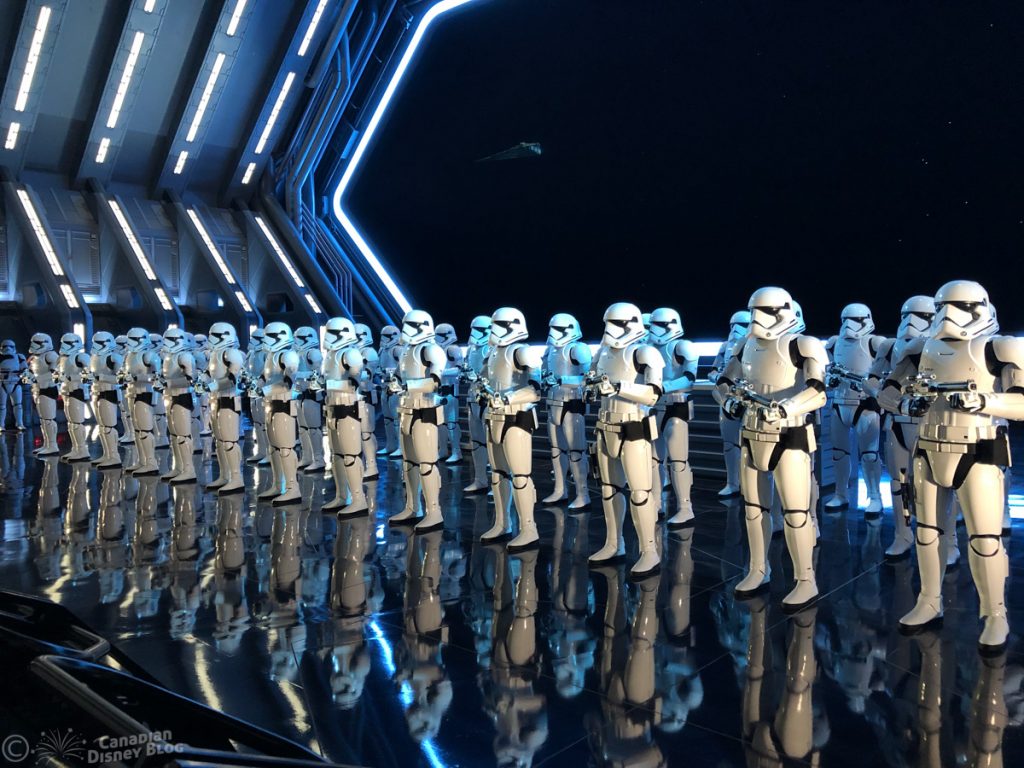 Okay, without giving anything new away, I’ll only share what Disney has said about the ride up to this point.

In the forest outside Black Spire Outpost, the Resistance is gathering recruits for a secret mission. You get to be one of those recruits.

The First Order is looking to extinguish the spark of the Resistance, so your mission is bound to have unexpected twists and turns. Your transport is captured by a First Order Star Destroyer filled with legions of stormtroopers and even Kylo Ren. A covert team of resistance fighters, including Rey and BB-8 are at the ready to help you escape. 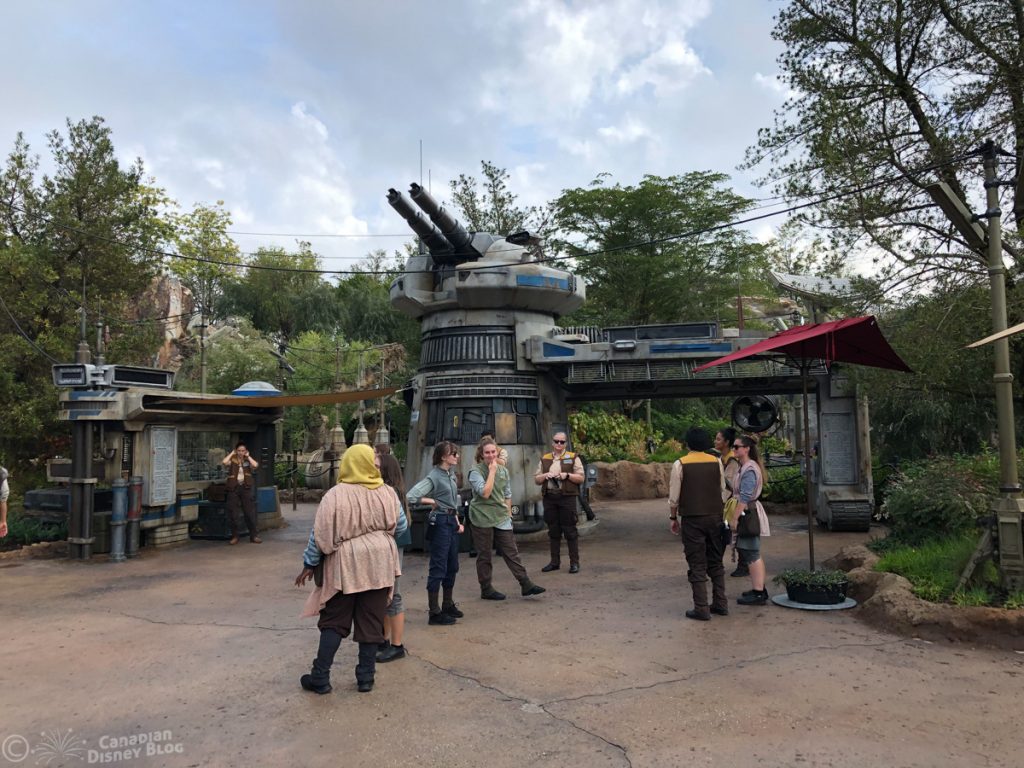 I won’t go into any details of what happens on the ride…read the spoilers for that. Instead, I’ll talk about how this attraction is one of the largest that Disney has ever created. There are multiple ride systems that are unlike anything you have experienced at a Disney Park.

I have told friends that it’s sort of like Disney Imagineering took a ton of their innovative tricks and put them all into this one ride. The effects have you wondering how they accomplished these incredible feats of technology.

Disney says this attraction experience is around 18 minutes long. That also makes it one of the longest attractions they have created.

The only spoilers we will talk about are the ones Disney has previously teased leading up to the opening of the attraction. We’ve all seen pictures of the hangar bay where a garrison of stormtroopers are lined up (see above). There are full-sized AT-AT walkers and a full-sized TIE Fighter as well. That’s all I’ll mention about the story of the ride.

For anyone worried about the motion of the ride, it is surprisingly smooth with very little “simulator” type of motion. Instead the vehicle you move around in is quick, but not jarring.

Now, in terms of our experience, I’ll speak in generalities. We loved this attraction. There is so much to see and experience that I’m still processing it, days later. I loved the detail and the level of Imagineering that went into creating this totally unique attraction. It truly is unlike anything we’ve ever seen. The Star Wars fan in me was blown away by the sheer size of the attraction and I’ve never felt closer to being in the stories than I was on Rise of the Resistance.

Having experienced it without spoilers, I can honestly say that I’m glad I didn’t read about it. I would recommend to anyone heading to Walt Disney World (or Disneyland) in 2020 to avoid watching videos about it, or reading spoilers about the ride. It’s not often we get to experience something so brand-new that it blows our minds when we finally see it. This is one of those opportunities.

This is a masterpiece of storytelling, musical scores and visual effects all wrapped up in one attraction. I don’t want to build the hype too much, because I wouldn’t want anyone to be disappointed that they’re not actually cutting up anyone with a real-life lightsaber (spoiler alert…you don’t). Instead, go into the ride expecting to experience something new and go in with the same wide-eyed awe that you had the first time you experienced anything Star Wars related.

Was it Worth the Wait?

In a word…yes. In two words…yes, absolutely!

Is it the Best Disney Ride Ever?

I’ll say it is definitely a contender. I loved this ride, and I would certainly say it’s one of the best, for sure. We’ll have to give it some time before declaring it anything just yet. Plus, all Disney attractions are subjective to the people who ride them. My favourite ride is Splash Mountain. Is it the best Disney ride ever? No, but it’s certainly my favourite. That being said, Rise of the Resistance has made its way to my favourites list for sure. It’s incredible and well worth the time to go and experience it.

What Are You Waiting For?

Seriously…make plans to go to Walt Disney World or Disneyland sometime in the near future. It’s worth the trip just for Rise of the Resistance. I suppose if you’re sitting on boatloads of cash, you may be waiting for a stay aboard the Star Wars: Galactic Starcruiser 2-night immersive adventure in 2021. Then again, if you have that kind of cash, you could probably afford to visit for a day or two now.

Who knew Space Mountain was a romantic ride? Maybe

This is why we love early mornings in Magic Kingdo

Deck 11 on the Disney Dream is a pretty happening

What’s your favourite meal at the Crystal Palace