The World-Famous Backside of Water!! A Skipper Canteen Review

Deep in the heart of Adventureland, you can find the Jungle Navigation Co. LTD Skipper Canteen nestled in the trees. If you somehow find you have an hour or so to kill in between your Citrus Swirl at Sunshine Tree Terrace and the bathroom breezeway from Adventureland toward Liberty Square, look no further than this pun-filled dining extravaganza (just make sure to pack light).

Skipper Canteen is one of the (relatively) new restaurants to show up inside the Magic Kingdom as it debuted in 2015 and has been delighting diners ever since.

There really weren’t enough Table-Service restaurants in the park prior to its arrival, but the Skipper Canteen provides another option for families to enjoy. It’s African, Asian and South American cuisine fills a niche that the park was also missing.

On the cost scale, the Skipper Canteen falls (or should I say Schweitzer Falls?) somewhere in the middle. Cinderella’s Royal Table and the new Signature-Dining at Be Our Guest are on the high end of the pricing scale, with The Plaza Restaurant and Tony’s Town Square Restaurant being on the lower-priced end. Skipper Canteen gives guests a great-themed dining experience at middle-of-the-road prices.

After all that preamble, here’s our Skipper Canteen Review (or for those that don’t want to read it all, our Disney Dining QUIPS are down at the bottom): 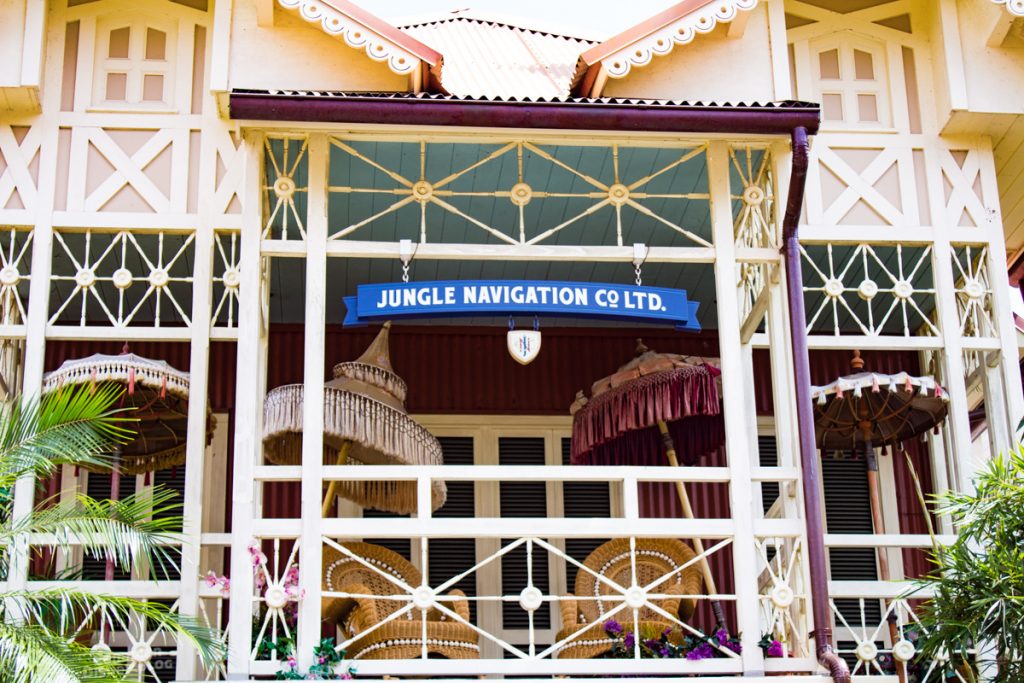 It’s difficult to describe the décor of Skipper Canteen, mostly because it’s so closely tied to the Jungle Cruise ride itself. Small nods to inside jokes are found throughout the restaurant. From afar, it just looks like jungle-themed décor, while the restaurant has been divided into three distinct areas.

The first room is the crew’s Mess Hall. This colonial-styled area has everything you’d expect a crew to put up on the walls – everything from pots and pans to photos and treasures from their latest expeditions.

After that is the “Jungle” Room, featuring an eclectic assortment of other jungle-related artefacts, as well as a beautiful array of china. The room used to be known as the Falls Family Parlour (named after the famed explorer Dr. Albert Falls), and bears the remnants of his journeys – not to mention the colourful stained-glass parrot lighting fixtures.

The last room is the S.E.A. Room, housing the secret meeting room of the Society of Explorers and Adventurers. Once hidden behind a bookcase (which still remains to frame the doorway), the room feels like where the elite explorers of the age would meet and regale each other with their tales of adventure.

The important thing to remember about the décor is the fact that it’s all meant to be silly and fun. There are a large number of inside jokes, outside references, puns and so much more. While it would take a keen-eyed Disney historian to pinpoint every reference in the building, you’ll definitely pick out a few, here or there, while you’re wandering through the restaurant. 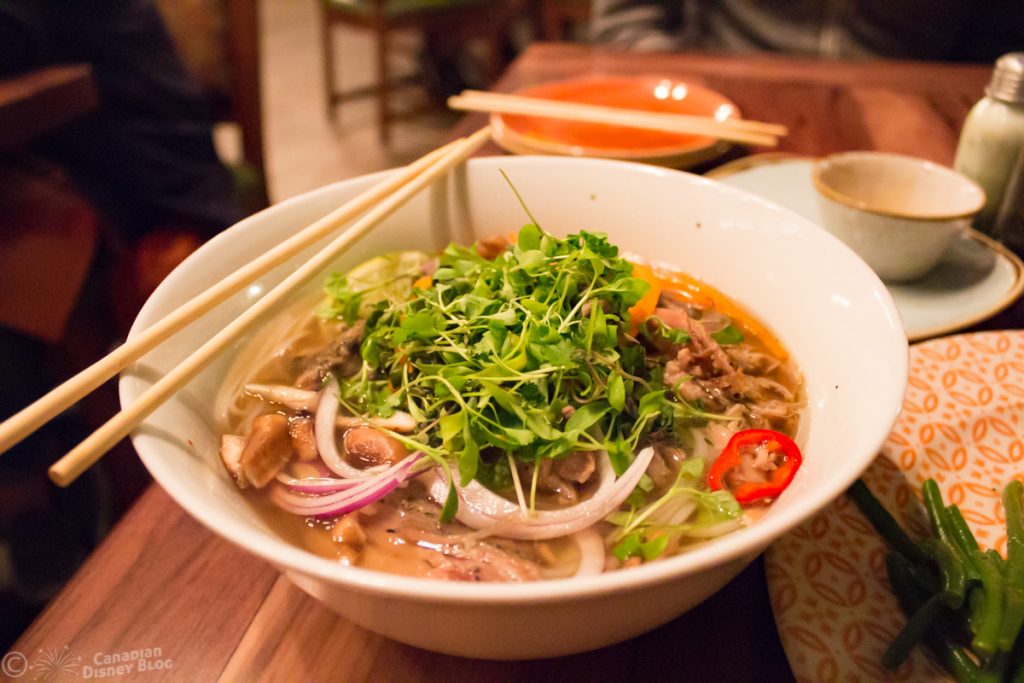 Skipper Canteen offers a totally unique menu, with African, Asian and South American influences in the cuisine. It was a bit of a leap for Disney to offer a menu that had, what some would consider to be, a blend of relatively exotic flavours. What I mean to say is that the menu is not your classic all-American fare that you’d find at most of the restaurants in the Magic Kingdom. Even at places like Tony’s Town Square or Be Our Guest, the menus are Italian and French-inspired, but tend to be less intimidating to the average Disney guest. 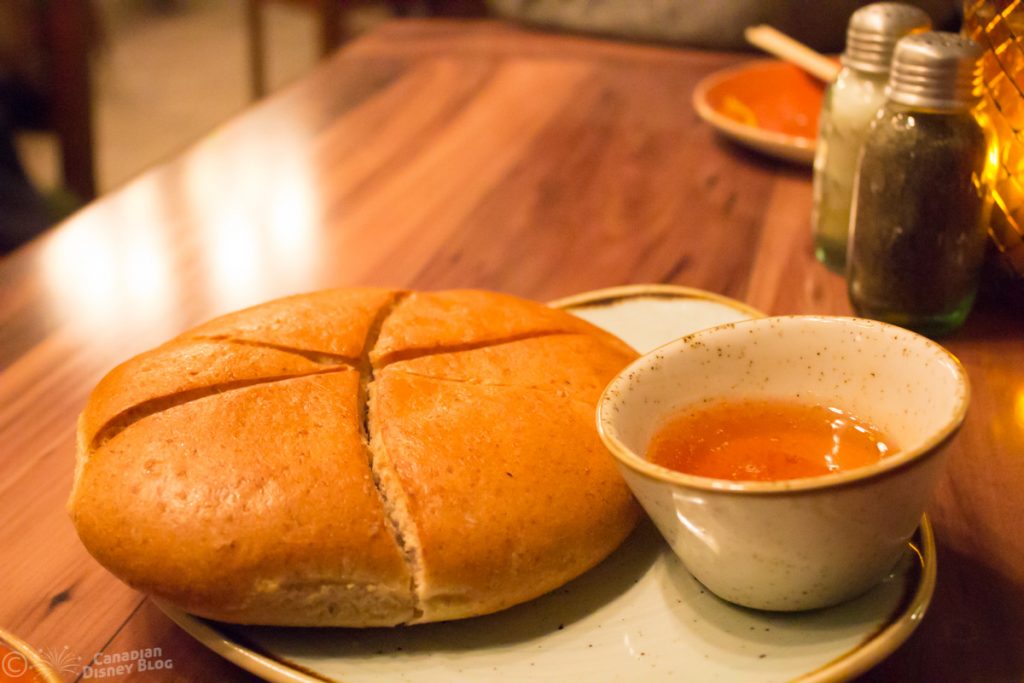 This menu shouldn’t intimidate anyone. It’s filled with some really great dishes, but as a (relatively) new restaurant, they have made some routine changes to the menu over the past year or two. I can only guess that it’s either to keep things fresh and exciting, or to try different dishes, replacing less popular ones. We’ve had a chance to dine a few times here and we’ve never been disappointed. That being said, two of the dishes we’ve tried are no longer on the menu, so that show you how quickly things can change.

The one thing guaranteed to be on the menu are puns and homages to Jungle Cruise legends. While not every dish needs a signature name, most do. This would include dishes like the “A Lot At Steak” Salad, the “Hardy Har Char” Siu Pork (a personal favourite), and the “Tastes Like Chicken” Because It Is!

Each dish is packed with flavour and I always recommend maybe taking a step outside your comfort zone to try something unique from the menu. 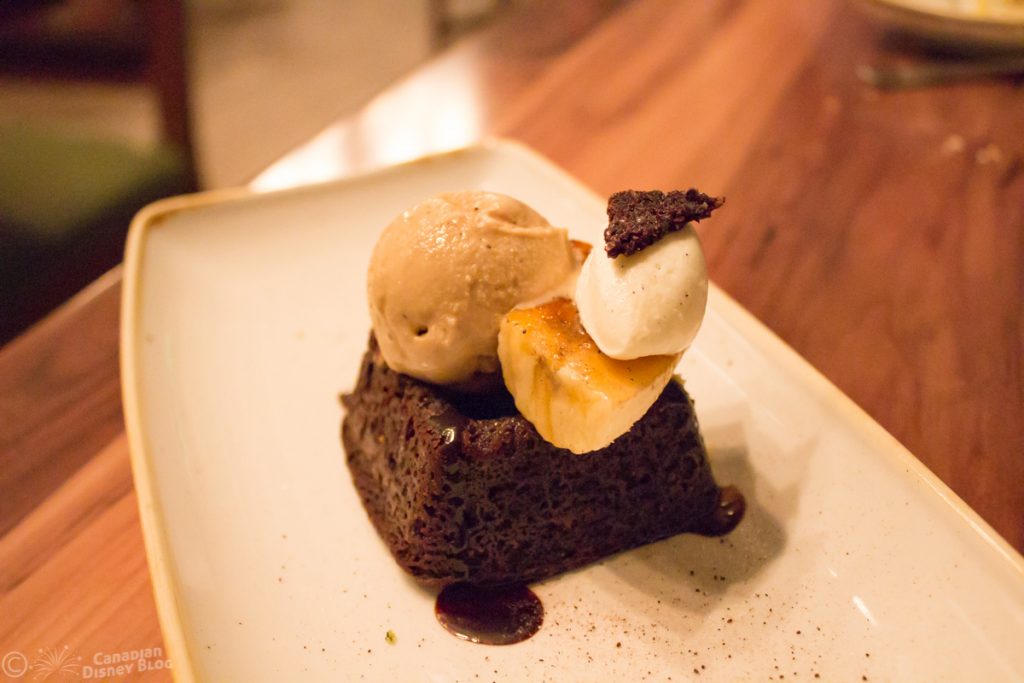 Our other favourites from the menu include the S.E.A. Shu Mai as an appetizer, and the Kungaloosh! for dessert (it’s an African-inspired chocolate cake with caramelized bananas with a cashew-caramel ice cream on the side). 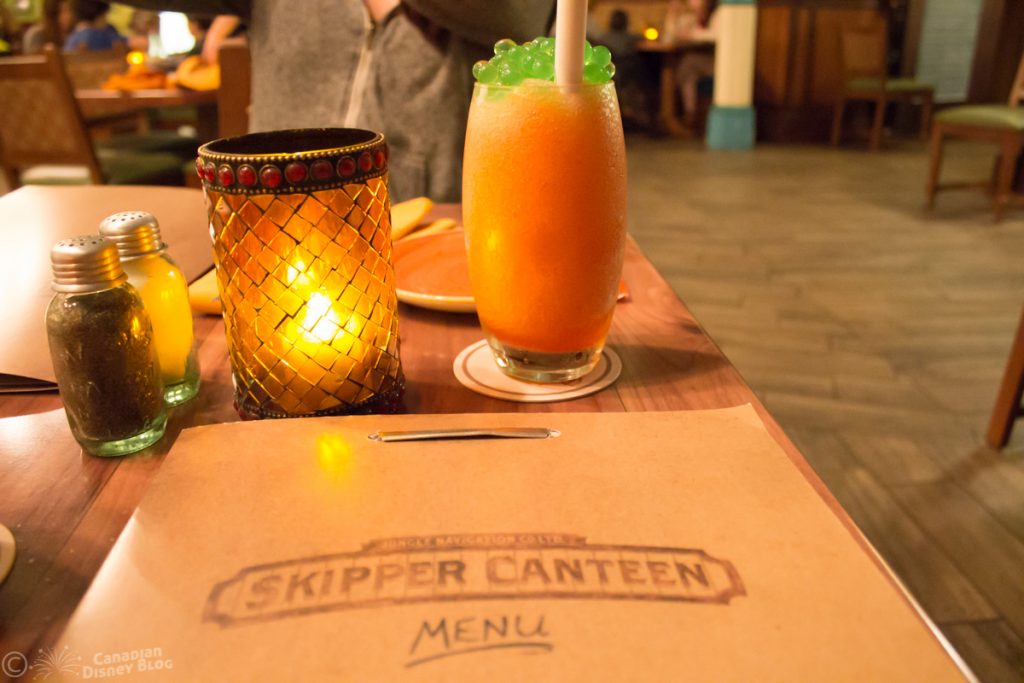 Equally creative is the drinks menu at Skipper Canteen. On the non-alcoholic side, the Punch Line Punch is a blend of tropical fruit juices and mango purée with a spiced-rim to add a punch of flavour. My personal favourite would have to be the Schweitzer Slush, which is a combination of frozen apple juice and passion fruit with a literal pile of green apple boba balls on top (I’m a sucker for any drink with those fun little squishy balls of flavour).

If you’re looking for their signature cocktails, they have a great house-made spiced sangria as well as their Jungle Navigation Co. Shandy (Blue Moon Belgian White Ale mixed with Simply Lemonade). 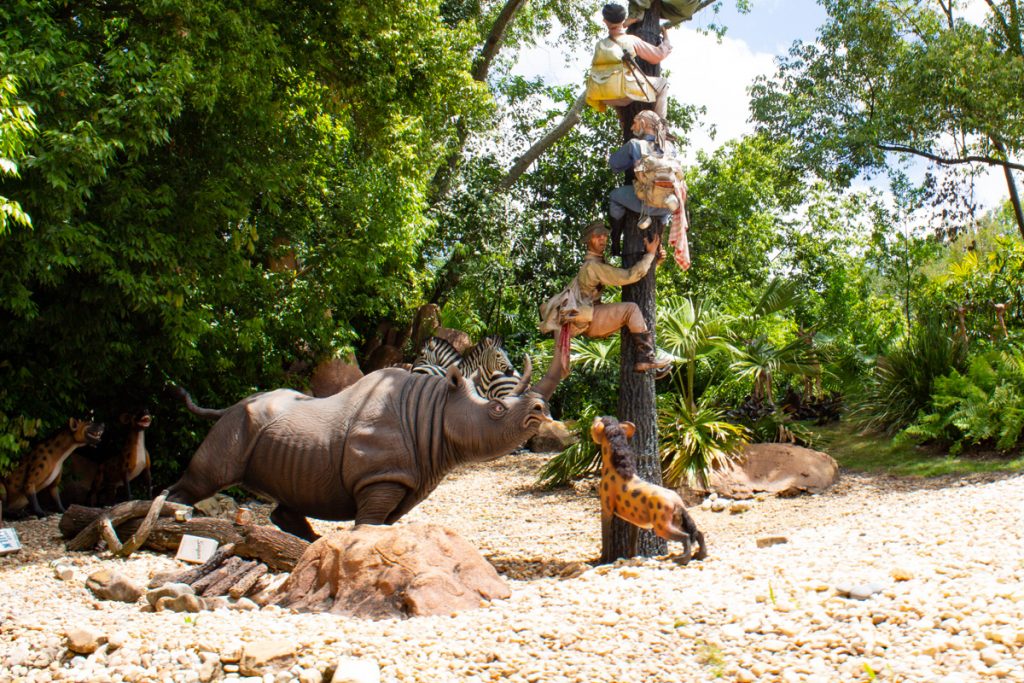 Part of what makes the Skipper Canteen so special is the fact that you have Skippers as your servers. While they likely aren’t Skippers on the Jungle Cruise by day and moonlighting at Skipper Canteen at night, you would be hard-pressed to tell the difference between the two. The Skipper servers are full of corny, pun-filled humour and are willing to give the same calibre of dry-wit performance from their Jungle Cruise counterparts, right at your table.

Skipper Canteen doesn’t get enough credit in the conversation about best restaurants at the Magic Kingdom. It tends to fly under the radar and the reservations are relatively easy to get. (I just checked a week out and there are still prime time slots for dinners for 2 and 4 people). We tend to think of the Skipper Canteen as the unsung hero of restaurants at the Magic Kingdom. It always has a good meal waiting for you and it’s usually something special. Plus, for fans of the Jungle Cruise humour, it’s an extension of the ride. It allows you to find hidden gems, not only on the walls, but in the menu as well. 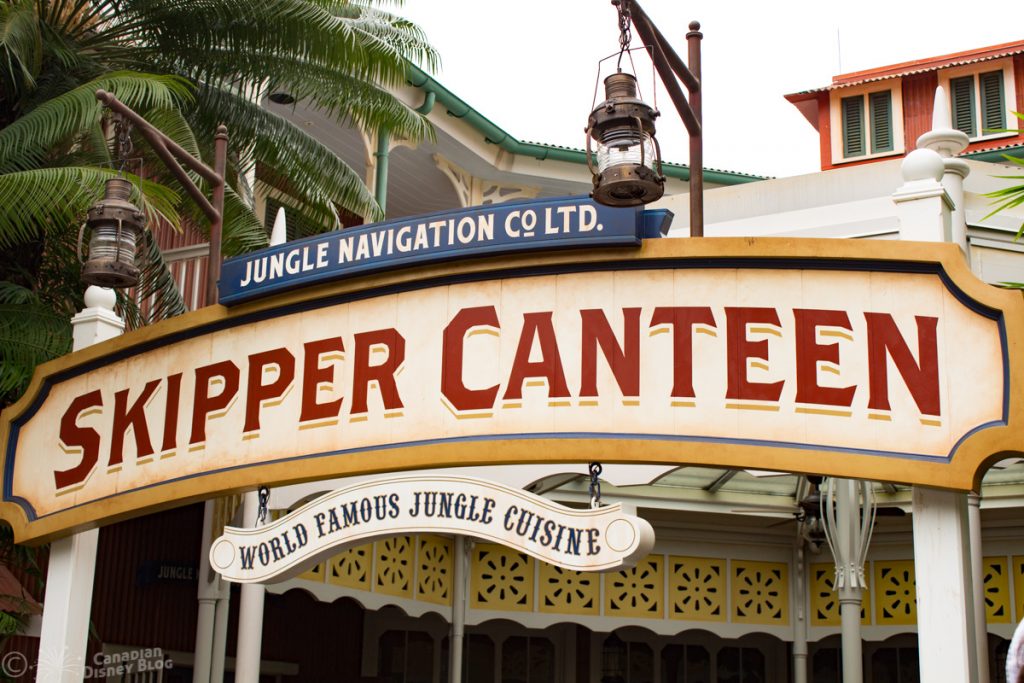 Quick – Skipper Canteen is an underrated table-service restaurant in the Magic Kingdom. Unique dishes with bold flavours make this a great dining spot for lunch or dinner. Plus, there’s usually good availability for reservations – even last minute!

Unique – The menu packs a wide variety of African, Asian and South American-inspired dishes. You really can’t find any other cuisine like it in the park. The puns and aptly named dishes (and drinks) immerse you in the story of the Jungle Cruise. Not to mention the incredible skipper serving staff (who are equally immersive).

Impressions – While the décor may need a keen eye to pick up the hidden homages (otherwise it would look oddly-placed), the food is always worth visiting for.

Palate – It’s the most unique offerings of flavours in the park, and as new dishes replace older dishes, it seems as though you may find something new each time you visit.

Skip or Stay – This is a definite Stay! With a number of places offering relatively All-American fare, it’s nice to see something different on the plate. It gives you the opportunity to try something new!

Have you played the Midship Detective Agency game

California Grill is one of our favourite restauran

Last night I dreamt we visited Blizzard Beach, so

We really enjoyed the short stay we had at Art of